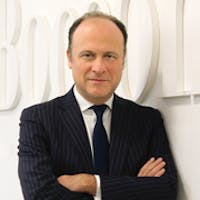 Stefano Caselli is the Vice Rector for International Affairs at Bocconi University where he is a full professor of Banking and Finance at the Department of Finance where he teaches private equity and venture capital, investment banking, and international finance. He is also the Director of MISB Bocconi – Mumbai International School of Business, the Indian branch of Bocconi University whereas he was the Head of the start-up project and the Director of the PGPB, Post Graduate Program in Business. At Bocconi he has covered various roles: he was the Academic Director of MSc in Finance (2010-2012), the Academic Director for Bocconi University of CEMS-MIM (Master in International Management of Community of European Management School) from 2005 to 2012 and the Director of EMCFB, and the executive master in banking and finance of SDA Bocconi (2005-2010). Today, he is a member of the board of Directors of the SDA Bocconi School of Management, where he held the position of Director of Executive Education Custom Program for Banks and Financial Institutions from 2006 to 2012. He has been awarded with the “Bocconi Teaching Award” in 2005, 2006, 2008, 2009, 2010, 2011, 2012, 2013 and with “Bocconi Research Award” in 1997, 2004 and 2011. He is conducting research at domestic and international levels developing several publications on private equity, sme’s and family business financing, corporate finance, corporate banking and banking strategy. He is member of the scientific committee of: CER (Centro Europa Ricerche in Rome), ECMI (European Capital Market Institute in Bruxelles), EVCA (European Private Equity and Venture Capital Association for PEREP Group in Bruxelles), and CAREFIN (the research centre for financial innovation of Bocconi University). He serves as an independent director in several boards of corporations and financial institutions: SIAS S.p.a. (company listed in the Italian Stock Exchange); Manutencoop S.p.A.; Generali Immobiliare Italia SGR; Santander Consumer Bank. Moreover he has been supporting many companies and institutions as strategic consultant (among them, Unicredit Group, Cariparma Group, Equita Sim, Telecom Italia Media, Borsa Italiana, ABI – Associazione Bancaria Italiana, OECD, Consob for the working group devoted to incentives for stock exchange). He acts as columnist and opinion maker on several newspapers and radio and television programs where the major ones are: Corriere Economia, TG1 Economia, Radio 1 Questioni di Borsa, Via Sarfatti 25, Class CNBC Network. He had also many interviews on Wall Street Journal, Der Spiegel, Bloomberg Channel, Le Figaro.