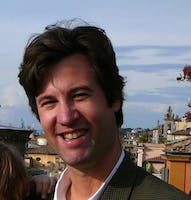 Peter Struck is Associate Professor of Classical Studies. He received his A.B. at the University of Michigan and his M.A. and Ph.D. from the University of Chicago. His primary research interests are in the history of ideas about the construction of meaning, with specialties in myth, literary criticism, and divination. His first book, Birth of the Symbol (Princeton University Press, 2004), won the American Philological Association's C. J. Goodwin Award for outstanding book in classical studies. He has published widely on ancient philosophy, religion, and literary criticism, and has given dozens of lectures at universities in the United States and Europe. He has held fellowships from the National Humanities Center, the American Council of Learned Societies, the Whiting Foundation, the Mellon Foundation, and the Center for Advanced Studies in Behavioral Sciences at Stanford. In 2004, he won Penn's Lindback Award, the university's highest award for teaching, and he won the Distinguished Teaching Award from Penn's College of General Studies in 2006. He has served as a media consultant to NBC, Newsweek, U.S. News and World Report, A & E, and the History Channel. At Penn, he is director of the Benjamin Franklin Scholars (2009- ) and founder of the Integrated Studies Program.