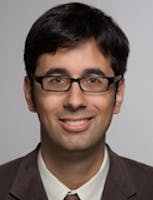 Nicholas Genes, MD, PhD, is Assistant Professor in the Department of Emergency Medicine at the Icahn School of Medicine at Mount Sinai in New York City. Dr. Genes graduated from Brown University, received his MD and PhD from the University of Massachusetts Medical School, and completed Emergency Medicine residency training, chief residency, and a fellowship in informatics at the Mount Sinai School of Medicine. Dr. Genes has distinguished himself in informatics research during his residency training, as informatics fellow, and now as departmental faculty. As resident, he developed an online adjunct to his program's journal club, which helped bring relevant articles, summaries, and evidence-based medicine calculators to the bedside and was presented as an Innovation in Medical Education at SAEM. He as also worked to incorporate clinical decision support tools based on ACEP Clinical Policy into his department's charting templates. As fellow, Dr. Genes studied the impact of health information exchange (HIE) among ED providers, and helped develop a novel method of using patient registrations captured via HIE to measure the impact of H1N1 on New York City Emergency Departments. After his fellowship, taking on an increased role in ED operations, Dr. Genes researched ED throughput and publishing several manuscripts on factors that influence crowding and ambulance diversion, as part of a multisite study. He has also implemented EHR innovations to help marshall resources toward at-risk elders in the emergency department through trackboard signals, structured data entry, and clinical event notification. He has spoken nationally on these innovative tools that are reducing admissions and costs among the most vulnerable patients. As part of a grant to study the impact of iteratively tested alerts to prompt physicians to consider age-appropriate pain medication among geriatric ED patients, Dr. Genes has taken the lead in implementing a randomized trial of adaptive decision support prompts in the EHR. An early leader in physician use of social media, Dr. Genes has spoken at national and international conferences on the utility (and risks) of social media in physician career development. He is researching social media’s capabilities for biosurveillance and toxicovigilance, and its potential for emergency preparedness and response. Dr. Genes also serves on several hospital committees to evaluate health IT innovations and distance learning technology for patients, providers and students.

Health Care IT: Challenges and Opportunities