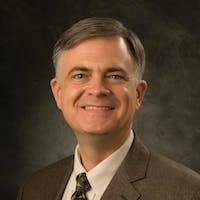 John D. Gill graduated from the University of Arkansas with a Bachelor’s Degree in English. In 1990, he received his J.D., with honors, from the University of Texas School of Law. Prior to working for the ACFE, Mr. Gill was an attorney in the Austin, Texas office of the law firm of Bragg, Chumlea, McQuality, Smithers and Curry where he was involved with civil fraud, insurance, and deceptive trade practices cases. He was the editor of the DTPA Forms and Practice Guide written by David Bragg and Michael Curry. In 1995, Mr. Gill joined the ACFE and served as both its General Counsel and the manager of the Research Department for nine years. When the Research Department expanded in 2003, he took on the role of Research Director. In 2009, he was promoted to Vice President – Education. In that capacity he oversees the production and development of all of the books, manuals, self-study courses, and seminar and conference materials produced by the ACFE. Currently, the ACFE publishes thirteen different books and manuals, thirty self-study courses, dozens of online offerings, and materials for more than thirty different seminars and conferences. He serves on the faculty of the ACFE and is a co-instructor of the CFE Exam Review class. He is a co-author of The Fraud Examiners Manual and serves as the editor-in-chief for the CFE Exam and the CFE Exam Preparation Course. He is also a contributing author to Fraud Magazine. Mr. Gill is a member of the Association of Certified Fraud Examiners, the Austin Chapter of ACFE, Phi Beta Kappa, the State Bar of Texas, and the American Bar Association.