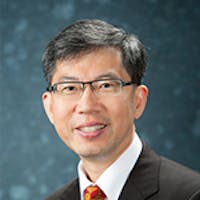 Prof. Yeung received the BS, MEng and PhD degrees in electrical engineering from Cornell University in 1984, 1985, and 1988, respectively. He joined AT&T Bell Laboratories in 1988. He came to CUHK in 1991 and has been with the Department of Information Engineering since then, where he is currently the Choh-Ming Li Professor of Information Engineering. Since 2010, he has been serving as Co-Director of the Institute of Network Coding. He is the author of the books A First Course in Information Theory (Kluwer Academic/Plenum Publishers, 2002) and Information Theory and Network Coding (Springer 2008), which have been adopted by over 60 institutions around the world. His research interest is in information theory and network coding. He was a consultant in a project of Jet Propulsion Laboratory for salvaging the malfunctioning Galileo Spacecraft.
Prof. Yeung is a member of the Board of Governors of the IEEE Information Theory Society from 1999 to 2001. He has served on the committees of a number of information theory symposiums and workshops. He was the General Chair of the First Workshop on Network, Coding, and Applications (NetCod 2005), a Technical Co-Chair of the 2006 IEEE International Symposium on Information Theory, and a Technical Co-Chair of the 2006 IEEE Information Theory Workshop, Chengdu. He will organize with David Tse the 2015 IEEE International Symposium on Information Theory in Hong Kong.
Prof. Yeung also has served on the editorial board of a number of academic journals. He was an Associate Editor for Shannon Theory of the IEEE Transactions on Information Theory from 2002 to 2005. He currently serves as an Editor-at-Large of Communications in Information and Systems, an Editor of Foundation and Trends in Communications and Information Theory and an Editor of Foundation and Trends in Networking. He was a recipient of the Croucher Senior Research Fellowship for 2000/01, the Best Paper Award (Communication Theory) of the 2004 International Conference on Communications, Circuits and System, the 2005 IEEE Information Theory Society Paper Award, and the Friedrich Wilhelm Bessel Research Award from the Alexander von Humboldt Foundation in 2007.
Prof. Yeung has been a Changjiang Chair Professor of Xidian University and an Advisory Professor of Beijing University of Posts and Telecommunications. He is a Fellow of the IEEE and the Hong Kong Institution of Engineers.