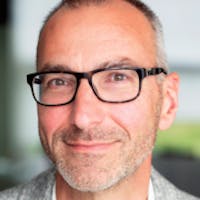 Menno Schilthuizen (born 1965) is a senior research scientist at Naturalis Biodiversity Center in the Netherlands and professor of evolutionary biology at Leiden University. He received his PhD from Leiden University in 1994, obtained two postdoctoral fellowships at Wageningen University and then spent seven years in Malaysian Borneo as associate professor at the then newly established Institute for Tropical Biology and Conservation there. His research revolves around evolution of biodiversity in insects and land snails and he has authored more than 100 high-impact papers in the scientific literature on these and other subjects. Besides his scientific work, he has been a prolific popular science writer on evolution, ecology, and biodiversity throughout his career. He has written over 250 stories, columns, and articles, about half for a variety of international media, such as New Scientist, Time, and Science, and the rest for Dutch national newspapers and magazines, such as NRC Handelsblad and De Volkskrant. He has written three popular books, one on speciation (Frogs, Flies and Dandelions: The Making of Species, Oxford University Press, 2001), one on community ecology and macro-ecology (The Loom of Life: Unravelling Ecosystems, Springer, 2008) and his most recent one on the evolution of genital organs throughout the animal kingdom (Nature’s Nether Regions: What the Sex Lives of Bugs, Birds and Beasts Tell Us About Evolution, Biodiversity, and Ourselves, Penguin, 2014). Schilthuizen makes frequent appearances on radio and TV and he was a co-developer of the Europe-wide “Evolution Megalab” (www.evolutionmegalab.org) in the Darwin Year 2009.