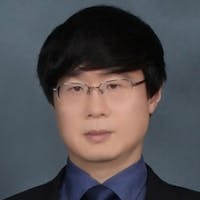 Dr. Jong-Moon Chung received his B.S. and M.S. degrees in electronic engineering from Yonsei University in 1992 and 1994, respectively, and Ph.D. degree in electrical engineering from the Pennsylvania State University in 1999. Since 2005, he has been a professor in the School of Electrical and Electronic Engineering, Yonsei University, Seoul, Republic of Korea (ROK). From 1997 to 1999, he served as an assistant professor and instructor in the Department of Electrical Engineering, Pennsylvania State University. From 2000 to 2005, he was with the School of Electrical and Computer Engineering, Oklahoma State University (OSU) as a tenured associate professor and director of the OCLNB and ACSEL labs. His research is in the area of smartphone design, network scheduler design, M2M, IoT, AR, CR, SDN, NFV, MANET, VANET, WSN, satellite & mobile communications, and broadband QoS networking. In 2012 he received the ROK Defense Acquisition Program Administration (DAPA) Director’s Award, in 2008 he received the Outstanding Accomplishment Professor Award from Yonsei University. As an associate professor at OSU, in October 2005 he received the Regents Distinguished Research Award and in September the same year he received the Halliburton Outstanding Young Faculty Award. In 2004 and 2003, respectively, he received the Technology Innovator Award and the Distinguished Faculty Award, both from OSU, and in 2000 he received the First Place Outstanding Paper Award at the IEEE EIT 2000 conference. He is a senior member of the IEEE, member of the IET and IEICE, and life member of the HKN, KIIS, IEIE, and KICS. He has served as the General Co-Chair of IEEE MWSCAS 2011, Local Chair and TPC Co-Chair of IEEE VNC 2012, and Local Chair of IEEE WF-IoT 2014. He is also an Editor of the IEEE Transactions on Vehicular Technology and Co-Editor-in-Chief of the KSII Transactions on Internet and Information Systems (TIIS).